July is over and with deepest regret we have to admit:
since 11 years there was no July with such few sunny days!

If you are planning to visit Vienna, maybe you want to check the weather beforehand, just to plan whether you'll dine al-fresco or better indoors. Whether you visit the Sisi-Museum or you stroll through the Labyrinth of Schoenbrunn Palace.

In any case, may we recommend two websites to assist your weather planning:

This is our favourite link, tested over years, and definitely the most accurate.

If you are a weather freak or geek, why not check out this one. You'll find statistics all over, a webcam and whatever else you'll like.

But maybe summer comes back and then, yes then, you will love to be up the Donauturm!

Posted by bluedanube apartments at 11:43 PM No comments: 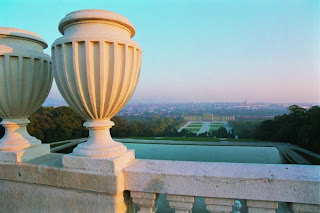 The first bookings for November and December are coming in right now!
To secure a comfy accomodation with good heating, easy access to public transport and ideally walking distance to the best gluehwein spots - BOOK NOW!

Don't forget - after summer, wintertime is the best time to visit Schoenbrunn Palace!

Drink a Heurigen at the Heuriger! Cheers!

It's raing cats and dogs - yes - this weather these days in Vienna is similar to the UK.

Rainy all day, damp, greyish - all in all, not a summer weather to go to the lakeside or to climb a mountain.
But Vienna has that much to offer, dont mind the weather!
Even if it's damp and not sunny, as long as there are no gusty winds and no rain why not pop into a Heurigen and chill the Viennese way!
The definition Heurigen comes from the german word 'heuer', which means this years'.
We use it for 2 meanings:
-  Heuriger can be the wine, which is harvested this year
-  Heuriger can be the place, where the winemaker sells his wine
It is a typical Viennese vocabulary, as more in the West of Austria, in Styria for example you would say Buschenschank, if you mean the winesellers place.
That said, Viennese people go to the Heurigen, sit at the Heurigen, often in the private garden of the winemaker and drink Heurigen! Got it?

It was in 1784, when Kaiser Franz Joseph allowed the winemakers to sell their own wine in their own house without any special licence.
Until today the tradition Heurigen is allowed  to open for a special period of time during the year only, while selling their Heurigen together with a small variety of traditional and local food.
This is why in a good Heurigen you will find only some small amount of cold, rarely warm food and almost never a menu card.
Sometimes local pastries are sold, which are home-made and delicious. Like this "Kardinalschnitte"

To know when the Heurigen is opened, just look out for the Buschen, a green bunch of pines hanging above the entrance of the Heurigen. If it is out it is "ausg'steckt", meaning the Heurigen sells it's Heurigen. Go for it!

Posted by bluedanube apartments at 11:04 PM No comments:

Salzburg, the city of Mozart!
Only 3 car/train hours from Vienna !

Enjoy the vivid city with its unique atmosphere in the Getreidegasse
Get wet at the waterfountains of Hellbrunn ....
take a deep breath high up on the mountains and
eat local food at the Zistelalm ...
explore the stunning Hohenfestung
or just chill in Cafe Stein or Tomasselli
and wait that Jedermann calls out loud! 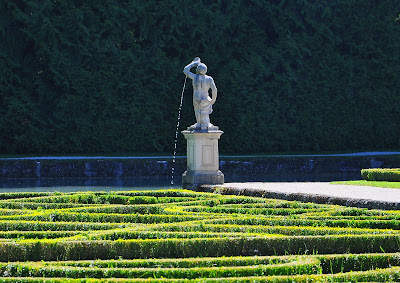 Finally when leaving Salzburg with the car,
make a stop at the A1 motorway service area Mondsee
The restaurant is unfriendly and crowded,
but the view is absolutely stunning
Enjoy!

Posted by bluedanube apartments at 5:23 PM No comments:

Bon Jovi back to Vienna

After 3 long years they are back!

In 2008 when Bon Jovi visited Austria and showed off their rock talent they chose Ebreichsdorf as their concert location.
Ironically Ebreichsdorf, our home town! This little village south of Vienna, a bit sleepy, for sure very conservative but that comes with a horse racing ground, by courtesy of Frank Stronach, the austro-canadian self-made man.
The trouble was built-in. Excellent concert, but chaotic logistics regarding on and off-transport!

This time the venue seems to be a much better option:
The Ernst-Happel-Stadion in Vienna, THE austrian football stadium. By far not as big as the top stadion of the world with 150.000 seats in Pjonjang and only half of the capacity of Wembley with 90.000, but anyway! And since the EURO 08 the stadion even has a heated green - anyone know, why we need that?

The Ernst Happel Stadion is a 30min walk along the former "imperial avenue" the Praterallee ..... if you have opted for bluedanubeapartment. Or you take the Ubahn and drop off 3 stops later! It can't be easier!!!

This time we are already fully booked with guests from Germany, who took the chance for a Vienny City trip and mix it up with a hopefully unforgettable Bon Jovi gig just around the corner! Well done!

Did you know, by the way that Jon named the band Bon Jovi because this name was more simple and sounded more like the name of a band than 'Bongiovi'. Jon was born John Francis Bongiovi.

Let's just hope that Richie Sambora doesn't have to comment on our austrian red-white-red flag, as he will see only a grey misch-masch. Never forget he's blind to red, greens and browns!

While the New Jersey boys are currently playing in Athens, obviously the Greeks do have money for the gig, but not for paying their taxes, the final stage setup in Vienna is under way.

And if you fancy to be a paparazzi, hurry up and position yourself at all sides 'n' corners of the Hotel Imperial, where the boys will reside.
Posted by bluedanube apartments at 10:02 PM No comments: