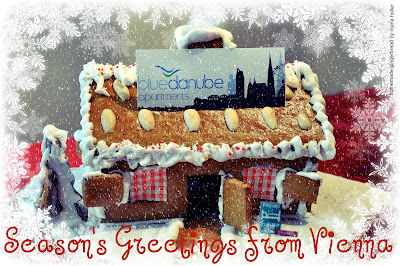 We wish everyone a blessful and festive season time!
May it be a joyful and peaceful celebration with your beloved ones!

This homemade gingerbread house was done by a friend
and smells deliciously, but will not be consumed at all!

Posted by bluedanube apartments at 7:31 PM No comments: 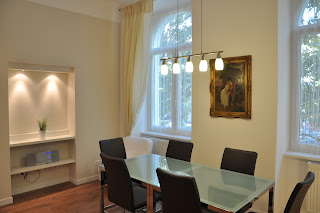 may we proudly announce that we finally registered with TRIPADVISOR.

Please be so kind and take the chance to share your experience in our place with all the other travellers: Tripadvisor Bluedanube Review
Posted by bluedanube apartments at 12:52 AM No comments:

When you're currently in Vienna you'll have 4 more days to enjoy the many christmas markets which are packed full of food stalls selling all kinds of delicious wintery goodness.

Mulled wine may be the most traditional, but you'll definitely should try Jagatee (spell it: jagate) and Punsch.


Let's start with Jagatee - this one really will boost your al level. Its the ultimative austrian skiing drink, hot, and a mix of black tea and pure dark rum with a significant dash of red wine and Obstler (schnaps). Smell it and you'll get drunk!
And by the way: Jagertee is a licensed austrian product, only here to be called like that. Drink it in Germany and you have to call for Huetten- or Foerstertee.
And don't forget Jagatee translated means Hunter's tea! And the hunter in Germany is the foerster! Got it?


Punch is quite famous in Britain too, we all know. So how did it make it's way to Austria?
Easy peasy with a pop star of course! But a star of the 17th century: Wolfgang Amadeus Mozart!


It is said, that punch was brought from India to Britain, quickly became very fashionable and Mozart encountered this drink on his travels in England.
No question he was delighted to show off the recipe, when he returned to Vienna.


The word Punsch seems to derive from the indoeuropean "fuenf" (in english five). 5 spices were said to be necessary for a punch: Ingwer, cardamon, cinnamon, cloves and fennel. The same we need to activate our chakras!


The word Pinsch is also familiar with Punsch, but Pinsch in Vienna means getting a 5 in school, according to our school system the fail grade!


Ok guys, that's enough now, come on and let's head to the next christmas market, enjoy the buzz, the smell and the delicious drinks, not to forget the yummy food!
And if you don't find your way home afterwards, there are enough carriages who'll take you home to bluedanubeapartments, where you can rest in comfort and style!

Posted by bluedanube apartments at 11:59 PM No comments:

St Nicholas & Krampus ..... dating back to the Habsburger


On 6 December the Feast of St Nicholas, the most important of the church festivals in the period leading up to Christmas, is celebrated in Central Europe

One of the oldest traditional customs, it has always been a festivity for children. In Austria, St Nicholas is accompanied by the diabolical figure of Krampus: the saint is benevolent and brings gifts for the children, while the role of the Krampus is to punish childish misdemeanours. Thus gift-giving was not originally associated with Christmas itself, which was a purely ecclesiastical feast; Christmas as a family festivity at which children received gifts is an invention of the Biedermeier era.


St Nicholas’s Day was celebrated in all social classes, including the imperial family: at Court gifts were distributed in the evening of the 5 December, and on 6 December the imperial family attended mass at the Convent of St Nicholas on Vienna’s Singerstrasse, later dissolved by Joseph II.


There exists a well-known depiction of this custom executed by Archduchess Marie Christine, a daughter of Maria Theresa, in 1762. Set in a small family living room, it shows a number of the empress’s children discovering gifts in their shoes under the fond gaze of their parents. This scene has often been adduced as evidence indicating that the Habsburgs led an almost bourgeois life within the inner circle of the family. However, recent research has demonstrated that Marie Christine based her depiction on Netherlandish models, copying them down to the smallest detail. As the furnishings of the room and the way in which the figures are depicted have absolutely nothing in common with ceremonial life at Court, it is now assumed that this scene is a kind of playful attempt to depict the ideal of middle-class family life that was just starting to emerge in the age of Enlightenment. It can be compared to the pastorals of the Rococo era, where the nobility fled the rigid world of court ceremonial for the ostensible idyll of rustic life.


The scene contains a number of details that are still associated with the Feast of St Nicholas. The children’s shoes are filled with sweetmeats and toys; while one of the girls is enjoying her new doll and the little boy in the centre is laying into the sweets, the older boy only has a birch in his shoe, an unwelcome gift from the Krampus …

Posted by bluedanube apartments at 10:54 PM No comments: